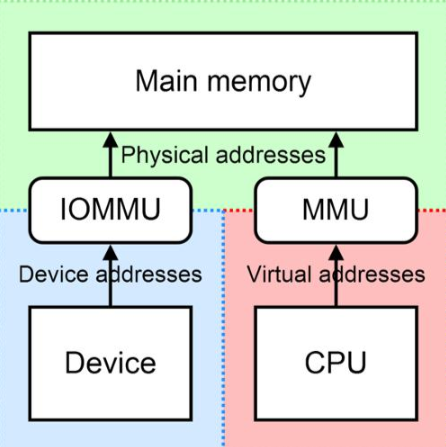 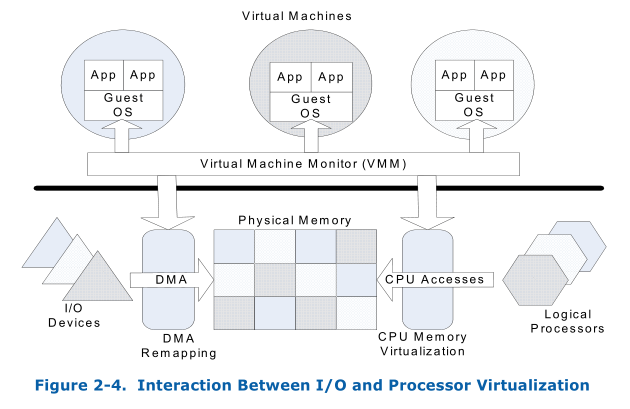 qemu/kvm virtual machine now uses VFIO to do device assignment. VFIO utilizes IOMMU’s DMA remapping to do DMA in VM, but it doesn’t use interrupt remapping as it is not efficient compared with the irqfd in kernel IMO.

The basic idea of IOMMU DMA remapping is the same as the MMU for address translation. When the physical IO device do DMA, the address for DMA is called IOVA, the IOMMU first using the device’s address(PCI BDF address) to find a page table then using the the IOVA to walk this page table and finally get the host physical address. This is very like that how the MMU work to translate a virtual address to a physical address. Following figure show the basic idea of DMA remapping, this is the legacy mode, there is also a scalable mode, though the detail differs, the idea is the same. 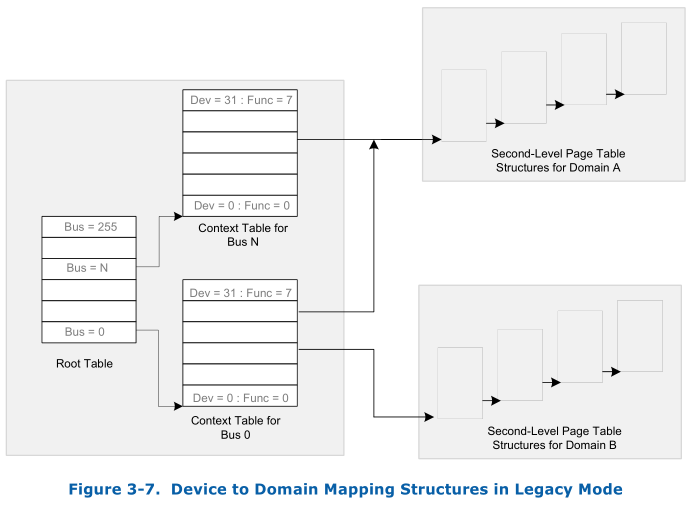 A context-entry maps a specific I/O device on a bus to the domain to which it is assigned, and, in turn, to the address translation structures for the domain. Each context-table contains 256 entries, with each entry corresponding to a PCI device function on the bus. For a PCI device, the device and function numbers (lower 8-bits) are used to index into the context-table.

The root-table and context table is setup by the IOMMU driver, the page table is usually setup by the VMM. Of course, any process can do setup this page table. The IOVA is used as the input for the IOMMU translation, this address is device’s view address. The IOVA can be any address that is meaningfor for the guest or process. For example, the qemu/kvm uses the GPA as the IOVA and also you can uses another address as the IOVA. The VFIO uses IOMMU to do the translation from GPA to HPA.

Next I will write the code analysis of the intel IOMMU driver. Also I will write a post for the iommu hardware’s implementation as qemu implements the amd and intel iommu.